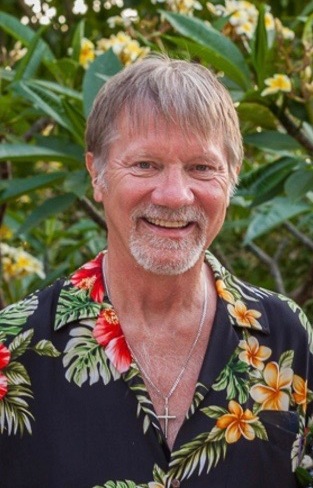 Mark Alan Patterson of St. Louis Missouri, a native of Elmwood Illinois, passed away at 9:05 am on August 18th, 2020 at his residence, Green Park Senior Living Center, in St. Louis.
He was born August 4th, 1953 to parents Dr. Harold and Mildred (Heiman) Patterson.
He is survived by two sons Clayton (Michael Lott) Patterson of St. Louis and Mike (Marte Etzold) Patterson of Eureka Mo. and grandchildren Michael, Belle and Caitlyn.   Additional survivors include his brother James (Anne) Patterson of Farmington IL and brother Keith (Becky) Patterson of Peoria IL and three nephews/nieces Todd (Tami ) Patterson of Lone Tree, Iowa, Jody (James) Anderson of Downers Grove, Illinois and Jon Livingston of East Peoria Illinois.
He was preceded in death by his parents, his daughter April, and his sister Susan.
Mark graduated from Elmwood High School in 1971 where he was a great basketball player.  He continued enjoying the sport for many years after high school.   Mark attended the University of Illinois and then completed the Caterpillar apprenticeship course to become a journeyman electrician.   He worked for Caterpillar until 1985.  He then became an electrician for Ford in St. Louis until his retirement in 2006.
Mark was an avid St. Louis Cardinals fan. He loved to wear his Fred bird hats on opening day. Mark will be remembered for his great sense of humor and loud laugh.
Cremation rites have been accorded by Michel Funeral Home, 5930 Southwest Ave, St. Louis Mo. 63139 where a memorial service will be held on Monday August 24. Friends may call from 6 to 8 pm.
There will be a memorial service with burial in Elmwood Illinois at a later date.
Memorials may be made to Elmwood Educational Foundation, PO Box 103, Elmwood IL 6152

A great man, with great sons

Clayton, Mike and family,
We are holding you close in our thoughts and prayers with the passing of your father. May you find comfort in the cherished memories you shared.