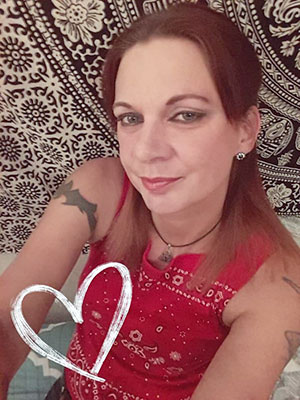 Her unexpected passing leaves a giant hole in the lives of her family and all who knew her.

She could be best described as a force of nature. Always doing things on her own terms, there was an electricity to her presence you could never forget her. Angi was a very loving, curious and sincere person; always taking time to get to know others lives and empathize with them. So many people are much richer for having known her.
Angi was born on July 3, 1974 in the city of St. Louis. She lived there much of her life she traveled in her youth seeking new adventures in Washington state as well as other parts of the country. Her stories were always filled with these times; she truly wished to explore the world again.

Her early life was filled with more than a little difficulty, moving from place to place. Even as a child she felt that she was the protector of her little sisters, that feeling never left her. The girls eventually found security with two strong women, their Grandmother Clementine Hall, and Aunt Nicky. While still being in school and money being tight she often held more then one job at a time to help with expenses, all while being in school at Messiah Lutheran.

The brightest event in her life was when she became pregnant with her son Demetrius whom she gave birth to on August 13, 2009. He is her greatest gift to all of us, smart, sharp and more mature than most adults. A favorite song that she would always play for him is Simple Man by Lynyrd Skynryd, they would often curl up together as she played it for him. Please listen to it sometime and know how much she loved him.

Angi was a very intelligent, creative person, loving the arts, great literature and always, always music. She could listening to classical, Rock, Hip Hop or Country. Songs were always swirling around her house, filling it with life and energy.

She loved her family and friends very much. Often going out her way with her own unique energy, hoping to make things better for others, and expecting nothing in return.
Sadly, she struggled with mental illness much of her life; this led to addiction problems that sometimes caused her to close off from those that loved her. Angi never really meant to do this, she just never felt worthy of the love that others felt for her. This awful roller coaster never would truly stop for her even though she so desperately wished to get off. The scourge of our modern age finally took her life. Leaving us all to pick up the pieces and try to put our lives back together with the love that she gave out hearts.

In addition to her son Demetrius, she is survived by her mother Jo Ann Cerutti, sisters Gina Laxton, Vanessa Riley and husband Wesley Templeman. One could also add the friends who knew and loved her best, Amy K. Holmes, Chrisi Cummings, Wanda Wildwood, Todd Robinson and Bruce Wulff.

I am truly, deeply saddened to learn of Angi’s passing. I went to school with her at Messiah in the mid to late 80’s. Then saw her again in the neighborhood in the mid 90’s.
She was a very kind soul. She would laugh at almost anything said. When talking to her, she would always keep eye contact, as if she was peering inward into you. She was truly an awesome gift of God.
My heart felt condolences to her family and friends.