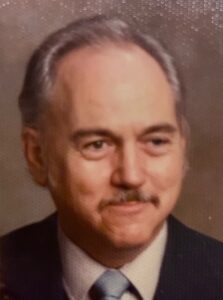 Bobbie Wayne Henry went to be with the Lord on August 5, 2022 at 91 years young. He was the beloved husband of Dora (nee Peng) Henry of Fenton, Missouri. He is survived by his sons, Robert (Cindy) Henry, James (Jeanna) Henry; and daughter, Melissa (Robert) Hardie; grandchildren, Christopher, Matthew (Valerie), Garett, Eliana, and Jaiden; and great-grandson, Jack. He is preceded in death by his father, Horace Henry; mother, Onva (nee Howard) Henry; and son David Henry. He was loved by all who knew him, and will be remembered for his sense of humor, his many stories, passion for music and dancing, and love for God, his family and friends.
A memorial service will be held Saturday, August 27th at 12:00 p.m. to honor his life, for all who wish to attend:
The River at Eureka Church
215 North Central Avenue
Eureka, MO 63025
(636) 938-6377
Parking in the upper lot along 3rd Street
https://www.google.com/search?q=the+river+at+eureka+church&ie=UTF-8&oe=UTF-8&hl=en-us&client=safari#
ARRANGEMENTS UNDER THE DIRECTION OF MICHEL FUNERAL HOME.