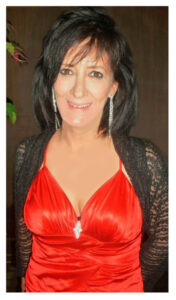 A dedicated widow and fiancé, mother of eight, and a friend of many peacefully passed away on January 16, 2023, surrounded by her loved ones, at Barnes Jewish Hospital in St. Louis, Missouri.

Carrie was born to Bonnie Leigh and Roy Grayson Edwards of St. Louis, Missouri, on April 25, 1963. She was moved through the foster care system at a young age and looked to her final foster mother and father, Nancy and James “Jim” Schoonover, as her second parents. At an early age, Carrie delivered her firstborn daughter, Kelly Marie Kraft; during her pregnancy, she met the late love of her life, Scott Jeffrey Schwartz, and they spent 28 years of pure love together as they built their family.

Carrie was preceded in death by her parents, Bonnie Leigh Edwards and Roy Grayson Edwards. Her husband, Scott Jeffrey Schwartz, and her sister Kimberly Janet Edwards-Ponton.

Flowers are welcome, but the family would prefer plants to fill their homes with what their mother loved most. Additional contributions will help provide financial relief for the family. Please send donations here: