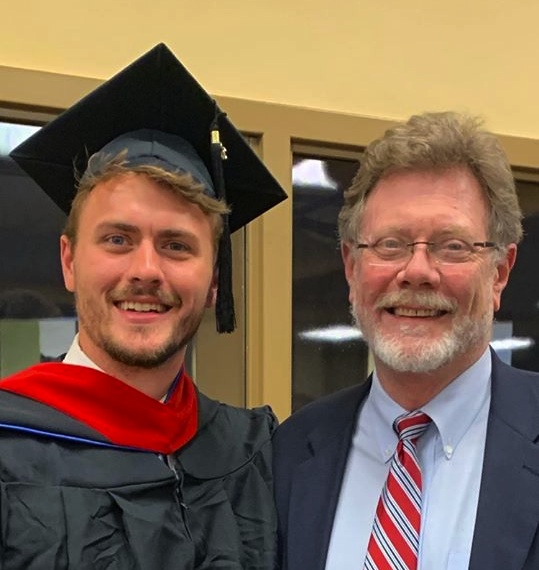 Kent was preceded in death by the love of his life, his wife Kathleen Althoff Westerfield and his father Harlin ‘Buck’ Westerfield. Kent devotedly raised their young son Brendan and the two were nearly inseparable. Together they cheered for Chaminade soccer, Cardinal baseball and the local miracle on ice, the Stanley Cup winning Blues. A native St. Louisan, retired electrical engineer, a lover of animals, self-described computer geek, talented artist and cook, Kent graduated from Hazelwood Central High School and the University of Missouri.

In lieu of flowers, please consider donating to the American Cancer Society.

Our prayers and condolences to you Brendan and your family. Your Dad was very proud of you.

Brendan,
You are being lifted up in prayer. I am so sorry for your loss. With deepest sympathy,
Karen Tiffin

My dear brother-in-law. Thank you for being an amazing uncle to Travis and Jordan and for always sharing your birthday cake and parties with Jordan and helping Travis out with his computers. You could always make me laugh (especially when you and Kyle got together) and you will always be the Big Lebowski to me. Thank you for getting me to love BBQ (well, yours anyway), eating crawfish with me and throwing my favorite New Year’s Eve party of all time. I love you so much and can’t believe you are gone. I will miss your big brotherly advice that always started with, “You know Aims . . .” Thank you for all you did and were for our family. You are one of the smartest, most artistic people I know and your time here was much too short. Know that we all love Brendan as if he is our own and we will watch out for him. I raise a toast to you, my dear big brother, until we meet again.

We are praying for you and the rest of your family. Your Dad was a super hero as he raised up such a fine man as you!
Love, Mike and Dena

Will miss Kent, a good friend with a big heart.

We are praying for you and your family.

May his memory be a blessing.

Kent, was a special friend and cousin. He helped to make my childhood fun. I will always remember his kind and warm spirit. I’m glad he has been in my life for 62 years and he will always be in my heart.
My prayers go out to Aunt Betty, Brendan, Kyle, Terry, Dom, Emi, Jordan and Travis. All relatives and cousins are united by the wonderful memories of Kent. Home will not feel the same with Kent missing. I see Kent dancing among the stars with Kathleen for eternity. God’s speed, my friend. How in-love they are.

We are sorry for your loss. Your dad was a great father and son. I enjoyed the times with him during soccer. Prayers to you and your family

Brendon, our deepest sympathies in your great loss. May our Lord strengthen you and comfort you giving you His peace in this difficult time.

Betty and Brendan,
So sorry for your loss. Kent was such a sweet guy. Brendan when you played sports with Robby we were lucky enough to become friends with your Grandma and Dad. God Bless.

To my big brother,

Boomer, I love you and will miss you terribly. We had our ups and downs over the years but always knew we had each other’s backs no matter what.

From baseball and basketball in the backyard to hockey in the basement, those were some of the best memories of my life. Being in each other’s weddings and being there for the birth of each other’s children I was always grateful you were there. Thank you for being a great uncle to Trav-man and Jordan they love you so much.

You and Pop keep the gloves oiled up and when I see you again in the backyard the three of us will play some catch like we used to.

I’m so sorry to hear of your loss of your dad. He sounded like an amazingly talented man and an even better husband, dad, and friend. That kind of love will never be forgotten and live on forever in your heart. I pray you feel God’s peace and I pray your sorrow will turn to joy knowing your dad is with the Lord.
In Christ’s Love, Janet Nemec

Our sympathy to Kent’s family. He was a great guy to have as a friend and a great person to work with at UE/Ameren. I know he will be missed by all.
Tom & Karen Collins

Kent and I played softball together at the old UE Club. Lots of memories.

Having worked with Buck, I knew Kent well. And when he started at UE/ Ameren, I worked with Kent and played softball with he and his “little brother”.
I attended Kathleen’s funeral, he was obviously devastated but knew he had to take care of his son. What a life-long gift to have your son be your best Bud!
My condolences to you Brendan on your loss. Stay close to your aunts and uncles and BE LIKE DAD!

Betty, Brendan & Kyle, our deepest sympathy to the Westerfield family. May your family find peace and comfort in Kent’s legacy that will live on with you and those of us who were blessed to have him in our lives.

Betty,Terry, and Kyle.
There are just not enough word’s to say how sorry I am about the loss of Kent.
He will be missed very dearly.
You have my deepest Condolence.
Sincerely Tim Burgess.

Brendan and family. May you find comfort resting in the everlasting arms of our faithful and loving God.
Praying for you as you grieve. Mike & Sue

I was surprised and saddened to hear the news of Kent’s passing. He was my first love and Kent will always have a special place in my heart. We met in a drawing class in college. This (very) tall, gorgeous blond sat next to me. And, he was, without a doubt, the most talented person in the class. I will never forget the intensity and beauty of our relationship.

In recent years, we found each other on Facebook and enjoyed catching up. Kent was always the first to send me good wishes on Jewish holidays.

My heart goes out to all the Westerfield family, who welcomed me into their lives with such warmth and love.