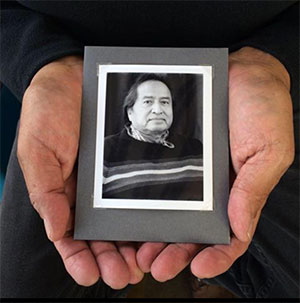 Originally from Shiprock, Marvin spent many years living in Albuquerque, before returning to Navajo homelands in 2015.

After a career as an office technology specialist, Marvin returned home to the Navajo Nation to pursue his passion of being an artist.

Marvin will be remembered by his family, friends and anyone who met him as a kind, humble, generous, and calm soul who never missed an opportunity to help others. He lived life with a sense of adventure, zest for experiencing new things and places, and found great joy in traveling to visit friends and make new friends far and wide.

Marvin was a creative artist in several forms of media and loved making moccasins for family and friends. He always went out of his way to make life better for others. He was the best father a son could ever dream to have in his life.

Marvin you were my best friend and the most honest man I’ve ever met. I am sorry we didn’t stay in touch and that I didn’t know you’d left this world until now. Thank you for being in my life at such a critical time so many years ago. You were a remarkable human being and I’m so grateful to have known you.