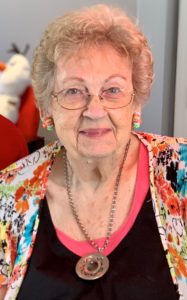 Mary Helen Mullersman was born in Fredericktown, Missouri on May 1, 1930 to the late Mary  Elizabeth “Betty” (Sebastian) and Frank Mullersman.

Mary graduated from St. Joseph’s School of Nursing (Alton, Illinois) as a Registered Nurse.  She began her nursing  career at John Cochran Veterans Hospital, St. Louis, Mo.  Mary continued her career at St. Louis City Hospital in the field of Nuclear Medicine until the hospital closed its doors in 1985.

Mary’s nursing career continued till the end of her life as she spent her golden years caring for her family, friends, and anyone who crossed her path. Mary Helen truly had a “nurses heart!”

She had a zest for life and a spirit that will continue to live on through everyone she touched during her 91 years of life.

Mary Helen Heinkel lost her battle with cancer on December 26, 2021.

The day I was born, God gave me the greatest gift, my very own beat friend, I called her Grandma. I only hope I can be half the woman she was. Fly high free of pain Grams! ❤️🙏