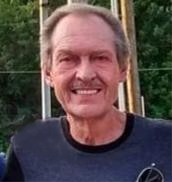 Melvin was born November 22, 1943 in St. Louis, MO the son of Alice and Louis Hebbeler.

Mel joined and served in the US Army. His careers included working for Nelly Don and Sears. Never one to sit still, once retired, he chose to work security at the Veterans Airport of Southern Illinois and other locations.

He enjoyed all things cars. A huge Nascar fan as well as racing, fixing and attending car shows himself. He was always the first to the dance floor with his bright blue eyes sparkling. He was a DIY man.

A celebration of Melvin’s life will be held at a later date.

So sorry to hear about Mel. He was such a nice person and a terrific dancer. He will be missed by us all. Prayers to the family.