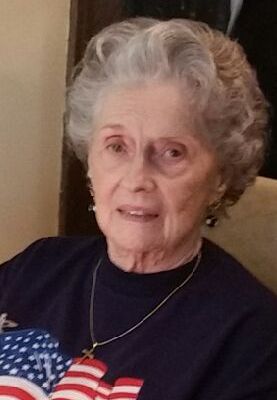 Patricia (aka Pat, Patsy, Logos, Grandmother) was born in Chicago, Illinois to Minnie Lucille Bayles Wilty and Thomas Sean Scanlon on July 4.  The year of birth has always been in question due to either a fire where the birth records were stored, or a distracted doctor who forgot to file her birth due to an emergency call to help a child injured by fireworks.  Officially, she was born in 1927, recently would admit to 1928, but frequently claimed 1930.  At one time she had a driver’s license that made her younger than her oldest son Kenny and the birth certificates of her children each have a different, ever younger age for her.

Her parents divorced (and/or he was killed) while she was young and her mother married Herbert Kenneth King when she was about 3.  Patricia took Mr. King’s name and always considered him dad. He was a musician which caused them to travel a lot.  They eventually settled in Des Moines, Iowa. Her parents continued to travel and during this time she was raised by housekeepers and sent to boarding school. They moved to Belleville, IL when she was about 12 and she attended Catholic schools through high school.

Patricia returned to Iowa and married Alva Junior Booth.  Together they resided in Seymour, Iowa and had two sons, Kenneth Dale Booth and William Ronnie Booth.  They soon divorced and Patricia, Kenny and Billy moved to St. Louis where her parents resided.  During this time she worked as a magician’s assistant for Harry Blackstone Sr. and traveled the country and Canada.  The skills she learned at this job came in handy during her recent illness in repeatedly escaping the mittens put on her hands to keep her from pulling IV’s and the feeding tube.  The nurses were told they would never outsmart her because she had been professionally trained!

She returned to St. Louis where she worked as a dance instructor for Arthur Murray’s Dance Studio.  Here she met fellow instructor Gilbert Irwin Cooper who she later married.  They lived in Riverside, California for a time while Gib was in the US Air Force.  They returned to St. Louis where they had two children – Matthew Shawn and Heather Jane Lucille and later became guardians to Gib’s younger brother Bruce Wayne Cooper after their mother passed.

Patricia enjoyed these years as a housewife and mother living only a few blocks from her parents.  She frequently would refer to these years as the best years of her life and liked to reminisce about her children when they were young.

When Patricia and Gib divorced, she and the children moved to a house on Lake Tishomingo in Hillsboro, Missouri.  It was during this time that Patricia was “born again” and she began a new spiritual journey that would last the rest of her life.

Patricia worked in insurance, sales and customer service until she retired. She returned to St. Louis around 1990 where she continued to live until she moved to Tulsa, Oklahoma in 2006.

Patricia greatly enjoyed spending time with friends and family no matter where she lived.  She was proud to be a vain woman who would never leave the house without her hair done, make up perfect and fully dressed with jewelry and perfume.  She did her hair and nails like a professional.  All of her healthcare providers commented on how beautiful she was.

Patricia is proceeded in death by her parents Lucille and Kenneth King, her siblings Edwin, Kenneth and Richard Wilty, children Kenny (Peggy) Booth and Heather Cooper and best friend Jackie Duckworth.  She is survived by children Bill Booth (Kristi) and Shawn Cooper (Sandy), many grandchildren, great-grandchildren, nieces and nephews all of whom meant a great deal to her.

In lieu of flowers, the family requests memorial donations be made to Porta Caeli House in Tulsa, Oklahoma where Patricia spent her last few days in their great care.

***DUE TO INCLEMENT WEATHER, SERVICES HAVE BEEN CANCELLED***

Thank you for including my mother, Jackie Duckworth.