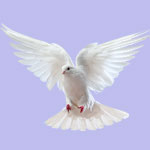 Randy is preceded in death by his father, step-father Kenneth Wicks; one brother James Hurt; and one sister-in-law Diane Link.

Per the request of the family and of Randy, no suits, no tie, come as you are.