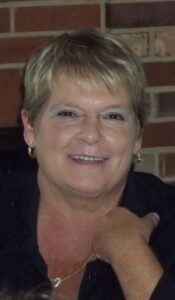 Rebecca Regina Sittingdown (Wicker) was born July 26th, 1961 to James W. and Geraldine D. Wicker and called home suddenly on October 8th, 2022. She lived a dignified and beautiful life. She provided comfort and endless love while asking for little in return. She was fearless, strong and loved her family with vigor.

She was adored by the love of her life, Keith Crocker, the last 21 years. He tirelessly took care of her through all obstacles in life and health.

She was cherished and fiercely loved by her two daughters, the late Sarah C. McVey and Stephanie D. Sittingdown (Nick Inglis). She was the perfect example of woman and mother. She was their hope, their teacher and the light in their lives.

She was the most loving Grandma to her only grandson, Wyatt Inglis (2). He calls her Maw and she showed him the purest of loves. Also infinitely giving him whatever he wanted. Their favorite thing to do was watch a movie, have a bottle in her chair on her lap.

Becky and her older sister Vicky had the strongest bond two sisters could have. They were each-others rocks in life. Vicky being older would care for Becky when they were children. They lived together in a two family flat as young adults. Raised their children together. They were avid shopping buddies. Hitting up every store, craft fair and their favorite country shops in Kimmswick, MO. They stood by one another through good and hard times. Vicky held Becky on her hip as a baby and also held Becky during the last moments of her life. Their love was steadfast and true from the start. Their last two years together were spent living next door to each-other just like when they were young. Becky loved having her sister close again.

Rebecca was the devoted Aunt to John W. Wicker Jr., Tiffany L. Wicker and Shannon W. (Jessica) Pease. Helping them and loving them in any way they needed in life. John Jr. was her first nephew. They “grew up” together. She one time found an infant coffin in an alley in South St. Louis. She drug it home for her “haunted house” (she loved Halloween). She then put John Jr. inside of it so he could jump out and scare people. Not creepy at all, right?! She was proud of that story. She was especially close to Tiffany, whom she referred to as Tiffy. She considered her her third daughter and always stood behind her filling her with words of strength and affirmation that she could do anything in life. She babysat Shannon’s first daughter Harper every day while they worked and that was always something she looked forward to doing. She loved her babies.

She was Aunt “Bucky” to John W. Wicker III, James W. Wicker and Andrew J. Mack. They were her boys and she loved them immensely. She raised “Baby” James and Andrew, she considered them to be the sons she never had. They kept her young and on her toes when they were little guys living with her. She gave them the same great love she gave so many.

She was the Great Aunt to Harper O. and Gideon A. Pease. She loved sitting and listening to Harper tell her everything about what was going on in her life, like her practicing cooking and what was going on at school. She always had something small and special in her drawer for them when they visited.

She loved and was loved by all who met her. Her stepdaughter, Dr. Kassi L. Crocker, her nieces Jenny and Kelly McGraw, her extended family in California, all of her friends and her children’s friends. Everyone.

She had the biggest heart especially when it came to her fur babies. She took in strays her entire life and made donations monthly to the Humane Society.

She was as beautiful as the flowers in her garden. She was full of love and shared herself with all who knew and needed her. She was a beam of hope and light, and the epitome of a good human being. To know Becky was to love Becky.

What a beautiful message of love in Becky’s obituary. Vicky, we are so sorry for your loss of your baby sister. Until you see her again with Our Heavenly Father. We are praying for you in this terribly difficult time. Prayers for peace in your heart. We are sorry that we won’t be able to be there for her memorial. We are out of town until Sunday night.