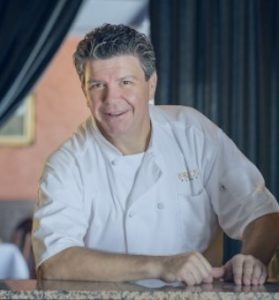 Richard A. LoRusso passed away at his home March 9, 2022 with his wife, Terri, by his side. Born in St. Louis on February 28, 1959, to Joseph and Alberta Dickinson LoRusso, Rich attended Southwest High School and Forest Park Community College Culinary Arts Program.

Rich began cooking at Godfather’s Ristorante and the Mayfair Hotel. In 1986 he opened LoRusso’s restaurant with his wife and partner Terri, whom he had wisely married four years earlier, and his brother Tom. In three years, the restaurant was so successful it needed to move to its larger current location on Watson Road and became known as LoRusso’s Cucina.

As good as Rich was at feeding people, though, his gifts extended far beyond that. A true boniface, his welcome was warm, his restaurant comfortable. Concern for what guests wanted, and what they might want on future visits, led his thinking. Patrons picked up on that, and the number of loyal repeat guests was proof. Many of them considered Rich a friend as well.

In the hospitality industry his friends were legion, from chefs to bartenders, most of them with several stories about him working or playing. Often times, Rich would be heading up a group of chefs to do charity work. He led or participated in innumerable benefits, whether they were for his neighborhood, The Hill’s charitable activities or Operation Food Search, all the way up to national organizations like the March of Dimes. One particular favorite was the Second District Police Officer of the Year luncheon for which he provided food for more than twenty years, honoring people for whom he had great respect. In turn, they, along with many firemen and EMTs, showed up at the benefit, For the Love of the Chef organized for Rich and Terri in November, an event that sold out within minutes and had too many volunteers to use, including media people.

Rich was a big guy. One of the few things almost as big as his heart was his sense of humor. Who can forget him wearing his Fred Flintstone costume and flying along on the little Vespa motor scooter? He kept that sense of humor through his whole illness, acknowledging its seriousness but realizing that the balance of light and darkness is what makes one day follow another.

He was preceded in death by his parents, his brother Joseph LoRusso, his sister Barbara LoRusso, and nephew Vincent  LoRusso.

Rich, unsurprisingly, asked that his body be donated to benefit a search for the cure of amyotrophic lateral sclerosis (Lou Gehrig’s Disease), his cause of death. His family will receive visitors at St. Ambrose Roman Catholic Church, 5130 Wilson Ave., Monday, March 28 from 4-8 p.m. A funeral mass will be held at St. Francis Xavier College Church, 3628 Lindell Blvd., Tuesday March 29, at 10 a.m.; visitation before the mass will begin at 9.00 a.m. and conclude at the start of the mass.

In lieu of flowers donations to the The Sick and Elderly Program of The Hill 2315 Macklind Avenue, St. Louis, MO 63110 would be appreciated.

This is such sad news. Rich was such a gentleman and I enjoyed eating at his restaurant. I always enjoyed interacting with Rich. I extend my deepest sympathies to the family. May God grant him eternal rest and comfort to you his family during this difficult time. I will never forget Rich!

Terri, Tony, Jimmy, Tom, Vince and the rest of the Lorusso family you have my deepest condolences for your loss. This is truly a sad day for all, and the Restaurant Industry. Rich was such a great and fun loving man who did so much for so many people. He had so much love in his heart and showed it with all his generosity and charity work. I am not alone in saying that he will always be missed, may he RIP, Love you Rich…

He did me a BIG favor..back in June 2011 i had a friend from Flora, Illinois ..about 140 miles east from Barnes Hospital..was dying and in his last days.
I called his resturant n Rich made a great meal but had no way of getting it delivered..as i am in Daytona Beach, Fl..Rich offered to..deliver..he did n also sent me a photo of him at my friend’s beside. THEY BOTH HAD ABIOG SMILE !
What a gem..! I still have that photo n cherish it
as that is the very last photo of Gary i have..he was a friend for 45 yrs.. RICH made it possible to give Gary the very last great meal ! Gary died a few days later.
THEY just dont make like Rich anymore
Hell.i never knew Rich til that phone call !
St Louis lost a great MAN ! He understood the words.. helping friends in the COMMUNITY & then some !

To the family,
From the first time I met Rich I knew I made a new friend. He was the go to guy if someone needed help. His presence in a room truly was a delight, and his off the cuff humor was always on the edge but he alone could pull it off. I will miss our crazy phone calls or random run ins. As they always bright a smile to my face.

Rich was more than a great chef. He was a culinary artist. Terri and her crew will continue his legacy.

Sending many Prayers to his family. Rich was such a good person inside and out. He helped with many events throughout my career in St. Louis. May you RIP Rich. God Bless

Barbara Schnarr (Steckhan) and family send deepest condolences to the family. Rich was a wonderful generous person. He helped every organization and every event in his community. A guy with a very big heart. He will be greatly missed. Prayers for the family.

Terri, Tony, Jimmy and the entire LoRusso family. My deepest sympathy. Rich will be missed by many including me. I consider myself blessed for having known him. RIP Rich. Gone from sight but never our hearts. To all our loved ones in heaven get ready for some awesome food, the chef has arrived.

Terri, I just read about this in the Post-Dispatch. You won’t remember, but we worked together briefly at MoBap many years ago. I’m leaving a message now because I lost my sister to ALS last fall and I understand. My condolences to you and yours. It sounds like your husband left quite a legacy. Peace to you all.

I worked for Rich when he opened Tutto Bene’. I can still remember his energy; the way he worked the room, talking to the customers. I enjoyed making him laugh. My Condolences to Terri, his family and employees. RIP

I’m a little older than Rich and I’d left STL for college and career after graduation in 1974.
After years away, I was able to get back for a reunion.
We had a Longhorn mixer at his place.
There’s no way he could’ve known me.
But when he saw I was a Longhorn, I was no longer a stranger. And yes. He took fantastic care of his customers by listening. offering, volunteering, and being a great role model for the neighborhood.
God bless y’all. May your love find your memories and may you smile when you remember his name.
🌹

From St.Ambrose Thru Life, Rich Exuded Strength & Class In Everything He Did. He Took ALS On Tbe Chin & Still Took The Time 2 Share Laughs & Memories & Pics With Everyone Who Took Time 2 Visit At His Worst Time! Heaven Gained A Truly UnSelfish Angel That Will Inspire True Happiness In Giving❤️ GODSPEED 2 Rich & Whole LoRusso Clan🎉🙏🎼