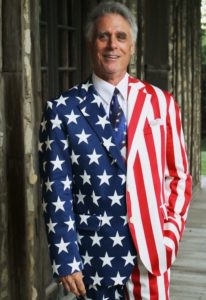 Robert “Bob” Romanik of Belleville, IL passed away peacefully Saturday, May 7, 2022 at his residence.  Born May 10, 1949 to the late Stephen Romanik and the late Juanita (nee Touchette) Romanik.

Bob is survived by his loving fiancée Katrina “Tina” Sanders.

Bob earned a Bachelor of Science Degree from Western Illinois University and worked effortlessly to get into police service and later received his police training credentials and joined the Major Case Squad of Greater St. Louis in 1986.  Bob was also a prominent and proud police officer in East St. Louis, Illinois, a police chief in Valmeyer, Illinois from 1979-1981, and also served as the police chief for Washington Park from 1984-1990.  Later he received his Masters of Arts Degree from Webster University.

Bob also showed interest in politics and sought public office twice; once for Illinois House of Representatives in 2016 and for the U.S. Senate District 57 in 2018.

In his later years, Bob was best known as the Grim Reaper of Radio.  He owned four radio stations WQQM, KQQZ, WQQZ, and KZQZ.  Bob was a true patriot, often seen driving around in one of his four Chevrolet SSR’s in which two were decorated with the American flag.  He frequently and proudly wore his red, white, and blue suits. Bob was very outspoken and fearless.  He strongly supported those who could not fight for themselves.  Often Bob’s supporters and fans would show up at restaurants or other public functions to say hello to Bob and tell him “Thank you” for all that he had done for the community, the American people, and the state of Illinois.   He had immense support for first responders, and had a great passion for animals.

Bob is preceded in death by his son Stephen Romanik, II.

Services will be private.

Donations in Bob’s memory can be made to an animal or veteran’s charity of your choice.

ARRANGEMENTS UNDER THE DIRECTION OF MICHEL’S FUNERAL HOME.

We were so sorry to here about Bob’s passing. Please except out condolences
Cotton & D’Lisa

So sorry for your loss

My name is Yvonne Romanov Hickman. Our grandfathers were first cousins and Steve was best man for my parents in 1940. I had no idea that Bob was ill. We spoke once on the phone. Your mom, Christine, kept in touch with my parents as they were true Romanics as some changed their names to ours. I often wondered about Bob after he was taken off the air. He had a large following in St. Charles. I’m sure he is missed

So sorry to hear about Bobby passing. Last time we spoke was at his son’s wake. I am 1 of his 4 cousins.