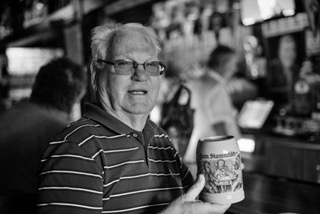 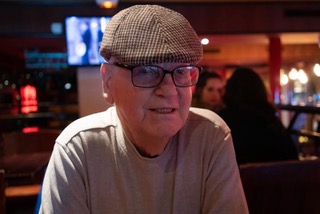 Subway lost a loyal customer on January 3, 2021 when Thomas M. Wilcox went home to be with the Lord.
Thomas M. Wilcox was born in Oak Park, IL on August 5th, #8 of 12 children.  This is where he began his lifelong love of “Da Bears.”  The Wilcox family moved to Glendale, N.Y.  and Tom played football for Grover Cleveland High School #21.  Tom joined the Army and was stationed in Alaska, there he met a character named Billy Ray Baisden.  After he attended the University of Kentucky.  He moved back to Chicago connected with friends, Billy Ray and Denny Nygren. That’s when the shenanigans began!  Tom went to an Irish dance with his buddies and while dancing with Frances “Mancie” Fisher told her, “I’m going to marry you someday.”  They were married for 48 years.  Now Tom is reunited with Mancie dancing to “Rose of Killarney” in heaven.
They are survived by their children: Tim Wilcox(Christine), Tom Wilcox (Susan), Andy Wilcox(Rachel), Beth (Dave Schmidt), Meg (Michael O’Brien), Grandchildren: Tiffany, Alexis, Luke, Casey, Christain, Miranda, Shannon, Mollie, Connor, Sydney, Patrick, Kaiden, & Jack  (Adam-Michael deceased), Great-Grandchildren: Kloe, Kyan and Daylen; whom they loved a whole big bunch.
Tom received his Masters in Education at St. Louis University and taught middle school math at St. Peter’s Catholic School.  He ran 7 marathons, was a skier and avid golfer, but enthusiastically enjoyed theater and traveling.  In cursillo Tom’s Catholic faith grew strong. 50 years later Tom reconnected with his high school sweetheart, Arlin Jacobsen.
Thomas M. Wilcox was simply the “Best Dad Ever.”  (I’m sorry if you think you dad holds that moniker).  He taught us many valuable lessons like:  Always be there for others, God is good all the time, the words to “Mick Mcgilligan’s Ball,” How to comfortably cram 7 people and a dog into one room of a motel, to always dance when someone plays “shoo fly” on the banjo, talk to anyone about their tattoos, never ever turn down a Guiness, and most importantly…. “If you like it like this, you’ll love it like that.”
ARRANGEMENTS UNDER THE DIRECTION OF MICHEL FUNERAL HOME.

To the wonderful Wilcox Family~ Firstly, I am so sorry for your tremendous loss. Your Dad was such a special man. Secondly, I just wanted to share that he (along with your Mom and Meg) are a large part of my childhood… especially asking where we were going, what we were up to as Meg and I were on our way out. Your Dad made every one feel special and truly cared about what was going on in others’ lives. Sending you all my love and lifting you in prayer.

I remember Tom with great respect and love. He was a stalwart in the Cursillo community when I first became involved with it, and I learned lessons about helping others from Tom.

Kevin and Molly Burns
2:56am

Tom was one of those rare people who once you met him, you felt like you knew him your entire life. Our loss is heavens gain.

To the family of Mr. Tom Wilcock., it was a true blessing to experience serving God through serving Mr. Tom. He was definitely a person with a daring personality. He did what made him and his family happy. He was a cheery person., no matter what . As his caregiver I recognized that he was a God fearing, he never seized to invite me to worship in the Chapel every Sunday. He was brave, love to laugh and always encourage me to continue to be a good caregiver. You are missed Mr. Tom.

Tom was a great friend and was so important to our family. He will be missed so much. My heartfelt condolences to all of the Wilcox family.
Mrs. Chuck

Carla and Sam Sciascia
5:06am

I am so sorry about the loss of your dad. I have so many memories of him. Visiting you guys on vacation at a lake somewhere when he and my dad took a fishing hook out of my cheek, multiple Thanksgivings, The Spaghetti Factory, and the yellow plastic sandals, which we hid by the spare tire in Andy’s car after he gave them to me for a wedding gift. Mr. Wilcox will really be missed .
Carla and Sam

Dear family of the wonderful Tom Wilcox,
Only once did I have the joy of meeting your dad and mom, but once was enough to see and experience the joy they brought to the lives of those around them. The great love they had for each other, and for their children and grandchildren, was easily evident in their faces as they talked about each one. The twinkle in their eyes and the big, bright smile shining on their faces, along with their wonderful laughter, are so clear in my memory from just that one meeting. From knowing your sister, Beth (Elizabeth), and hearing stories about your family, I know you each must have felt very loved and happy to have your dad and your mom in your lives, as well as each other as siblings. I pray as you grieve your personal loss … while simultaneously also celebrating your dad’s great life and love for you all … that your treasured memories will warm your hearts, and that the tender love and peace that only can come from the Lord will comfort and strengthen you as you carry on his legacy of making this world a better place. My thoughts and prayers are with you. I am so thankful that you know and trust Jesus …and that one day, through Him, you all will be together again!

I was blessed with being on the many kids in his lifetime that he left his positive influence on. His family is the best, and the values of his family first have always been such a gift to all us who were apart of the Wilcox family. We can only imagine his joy when he met Jesus and was told “well done”

I am so sorry for your tremendous loss. Your Dad was the best! He lit up a room with his laughter and personality like no one else! I have very fond memories of him and our family get togethers. During this pandemic everything is screwup-please let me know when you and your family decide to host a memorial. My prayers to you and your family during this very difficult time. God rest his soul.