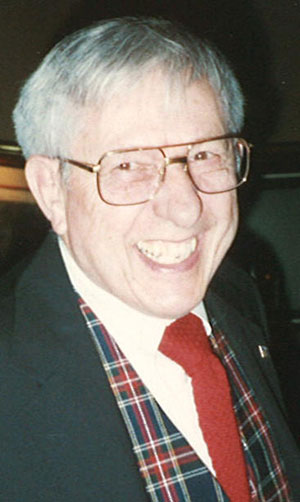 Vince passed away at his home of 44 years in the presence of family and enveloped in love. He will be remembered as a gentle and humble man, with a measured wit and endless curiosity. He was never without a project!

Born to Dominic and Caterina (“Kate,” nee Patrico) Lumetta, Vince was gifted in all things mechanical. Vince attended Ranken Technical College, taking coursework in radio. His studies were interrupted by WWII. During the war, he served in the Army Air Force as a replacement tail gunner on B-17s. On February 25, 1944, his 301st Bombardment Group was part of a coordinated effort of the Eighth and Fifteenth Air Forces against industrial targets in Germany. According to Vince’s Purple Heart citation, of the 31 planes that set out, only 10 crews made it to the target area in Germany, “causing grave damage…on this vital enemy manufacturing center…” Of the few crews that returned to base, seven members, including Vince, were wounded. He spent 14 months recovering, most of those in an Army hospital in Topeka, KS.

After the war, he returned to Ranken, taking coursework in electronics. After graduating, he worked in a radio repair shop by day, and repaired televisions in the evenings. He eventually bought the radio repair business, which he called Autronics, and expanded it over the years to include all car electronics. As cars became computerized, he earned contracts with both General Motors and Ford as a certified repair center.

Vince married Marcella Grace Fogarty in 1951. They were married until her passing in 2006. Together they raised 5 children and worked hard to provide a loving and joyful home for them. After his retirement, Vince picked up the hobby of working with stained glass, which he had become interested in after touring a glass factory in Kokomo, Indiana. He simply bought some glass and some equipment, and figured it out! His creations of lamps, windows, and candle holders grace the homes of many family and friends. In fact, a special window he made for the Italia-America Bocce Club at 2210 Marconi can be seen there today.