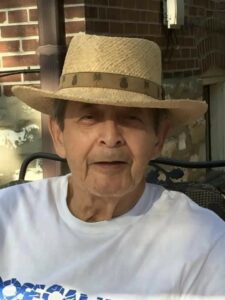 Ruben Joseph Torrez passed in peace on Friday, January 20th, 2023 at his home in St. Louis, Missouri surrounded by his loving family. He was 90 years old. Ruben was born March 29th, 1932 at his family home in Waukegan, Illinois to Mariano and Maria Torrez. He joined a vibrant family which included his brothers Yancy, Frank, Ralphie, Andy, Mario Jr. and Richie, and his sisters Bette and Jane.

Ruben moved to St. Louis where he met his beloved wife, Elaine Torrez (nee Gansert). They were married in February of 1966. Together they cherished a family of six children, nine grandchildren, three great-grandchildren, and countless family pets, including The Gooch.

Ruben had many hobbies and interests, which he carried out in style. He was never caught managing the yard or the barbecue pit without sporting his trusty red bandana, new balance sneakers and his short jorts. A shirt was entirely optional.

Ruben celebrated many accomplishments in life. He served his country in the Korean War as an artillery sergeant with the United States Army. He was a dedicated Pepsi Cola employee for 25 years, and he served as president of Holy Trinity Serbian Orthodox Church. But his greatest accomplishment by far was his ability to make a friend anywhere he went. Ruben’s laughter was infectious, and his generosity was without limits. His spirit, and his penchant for tall tales, will be deeply missed by all who had the good fortune of knowing him.

In lieu of flowers, the family asks that you please consider a donation in Ruben’s honor to Stray Rescue of St. Louis at www.strayrescue.org

Megan Chanell and Dorothy Tippen
3:23am

Mackenzie may you and your family know that you all are always in our prayers.